How long is the head table? An empirical assessment of concentration in global collective action

It is well known that the effectiveness of collective action depends negatively on the number of participants. For this reason, Olson (1965) regards group size as a key variable to monitor when analysing impediments to collective action. Sandler (2005) regards the difficulty of forming large effective coalitions as the first of Olson’s seven rules of thumb. Studies of international coordination have also emphasised its importance. For example, Hale, Held and Young (2013) point out that one of the main reasons behind the success of the 1987 Montreal protocol on eliminating ozone-depleting gases was that only a few countries were significant producers: the US, the EU and Japan accounted for 80% of total production and developing countries for 5% only.

It is therefore important, as part of an effort to evaluate impediments and incentives to global collective action, to assess the degree of concentration that characterises key international cooperation fields. In this note we provide such an assessment for eight fields corresponding to major channels of interdependence.[1]

It turns out that this concentration varies significantly across fields. Although other factors such as the diversity of preferences or the nature of interactions amongst players enter into play for determining the reason for success or failure of collective action, insights from analyses of the various sectors suggests that the degree of concentration is a significant one.

For this investigation we computed, for each field, an index of concentration for a variable that represents the various countries’ contribution to the problem collective action should tackle (Table 1). We are interested in the difficulty of the coordination problem that ought to be resolved in the first place, not in the power balance associated in a particular governance structure. So for example in international trade, we are interested in the contribution of each country or countries grouping to world trade, not in the particular rules governing international trade negotiation.

The concentration index is the Herfindhal index widely used for the analysis of market power.[2] The choice of the representative variable is in some cases straightforward: for example, CO2 emissions as far as climate change mitigation is concerned. In some other cases, it is less obvious: what determines, for example, country weights as far as international macrofinancial linkages are concerned? We selected gross financial assets, but this can be disputed.

Data for the most recent available year (between 2015 and 2018) are taken from various sources, whose coverage is uneven: it is comprehensive for trade, migration, climate change and the internet, and includes a subset of between 48 and 210 countries in the other four cases (see Annex for details). In principle, uneven coverage could affect comparison across fields. In practice the bias is second-order: the top 50 countries account for 99% of global exports, but the omission of a country whose share is 1% of the total only results in diminishing the index by 0.01 percentage point.

An important question is whether EU countries should be considered individual players or whether the EU should be counted as one. The answer depends on the field, as some belong to EU competences while others are of the responsibility of individual member states:

Results are given in Figure 1. It is apparent that concentration varies considerably across fields. It is especially high in two fields, global competition policy and banking regulation, where global collective action has so far proved relatively successful (Papaconstantinou and Pisani-Ferry, 2019). It is remarkably low for two others where it has proved unsuccessful (migrations and internet regulation). The concentration index is also low in a topical area such as trade, where global negotiations have stalled since the late 1990s, and where conflicts have emerged in the 2010, leading to the current crisis of multilateralism.

The relatively low concentration index in taxation points to the well-known difficulty to reform the international tax treaties and transition to a fairer system capable of tackling profit-shifting and addressing the specific challenges posed by the digital economy. The striking decrease in the GFSN concentration index when the Eurozone is split into its constituent members (instead of being considered as a whole) highlights how much is at stake in reforming the governance of EMU, especially as regards relations with the rest of the world.

Overall these results suggest an influence of concentration on the effectiveness of global collective action. This is obviously no proof, but suggests that there was some wisdom in Olson’s first rule of thumb. 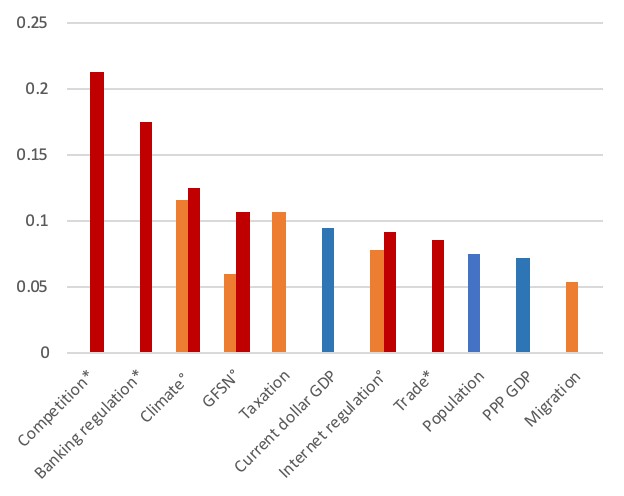 Source: own calculations. A star indicates that the EU (or the Eurozone for the GFSN) is assumed to play as one in the field. A ° indicates that both indexes are provided (red for the EU as one, orange for EU countries considered individually). GDP, PPP GDP and population (all for individual countries) serve as benchmarks.

As a further exercise, and when the data allows, it is interesting to compare the evolution of concentration indices over the last two decades. We do it for two domains where concentration at international and EU level have arguably evolved, namely trade and the internet.[3] Comparing the share of the top ten players and the Herfindhal indices for 2000 and 2016, it is quite apparent that concentration has decreased both at global level (mainly because of China) and at European level (mainly because of the catching-up of the new member states).

The evolution at global level is very substantial when it comes to the internet – a domain in which the EU probably represents the regulatory global avant garde thanks to the GDPR, and data protection more generally – but it is not negligible in terms of trade concentration either. 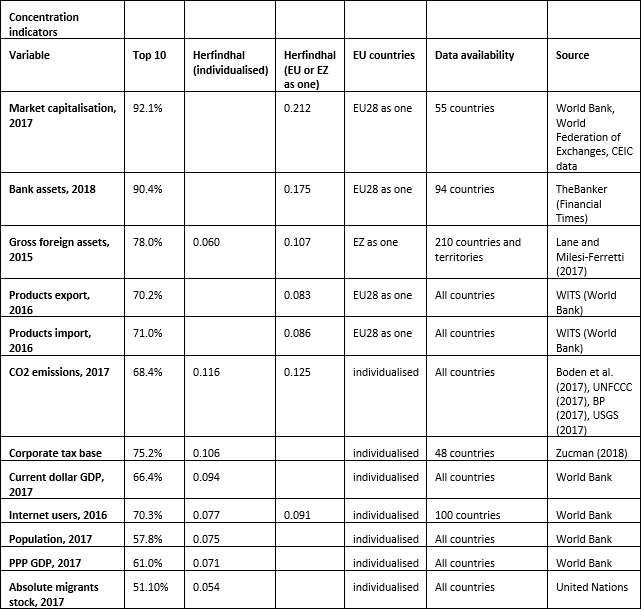 [1] The record of collective action in each of these fields has been investigated within the framework of the Transformation of Global Governance Project of the European University Institute. See Papaconstantinou and Pisani-Ferry (2019).

[3] The composition of the EU is held constant over time.